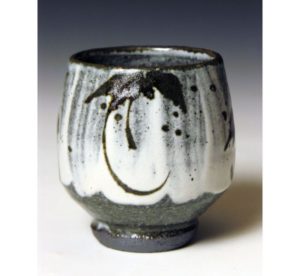 Phil Rogers was born in Newport, S. Wales in 1951. He attended Newport and Swansea Colleges of Art and then, after graduating, spent almost 5 years as a teacher of art and pottery in secondary schools. In 1977 he moved to Rhayader in Mid Wales and opened his first workshop.
In 1984 a move to Lower Cefnfaes, a fifteenth century farmhouse and buildings, about ½ mile outside Rhayader gave him the space he needed to expand the pottery and to build a variety of large kilns.
A past Chair and council member of the Craft Potters Association Phil has served as a trustee on the Adopt a Potter Foundation and the Craft Potters Charitable Trust. Currently he is working with the Fitzwilliam Museum in Cambridge cataloguing and annotating the recently bequeathed Dr John Shakeshaft collection.
Phil Rogers has written respected books on ash glazes, throwing techniques and salt glazing. He has conducted workshops and lectured all over the world most notably in South Korea, Canada, S. Africa and the USA. In 1992 and 1995 he worked for Project Ploughshare to create a pottery for women in Ethiopia. Phil’s work is held in the permanent collections of more than 50 museums worldwide including, amongst others, the Victoria and Albert, The National Museum of Wales, The Museum of Ceramic Art in Mashiko and the Boston Museum of Fine Art.

I grew up in a suburb of Seoul the South Korean capital. As far back as I can remember I had an abiding interest in all kinds of art. In 1995 I began my studies at Sungshin Women’s University in Seoul to study craft in the broadest sense but I quickly became attached to the ceramics department. I graduated with a BA in 2001 and went on to study for my MA which I completed in 2003. Later I became a teaching assistant at the same university and subsequently a lecturer.
While in Korea I won a number of competitions for my ceramic sculpture which, at that time, was very large scale. Amongst my successes in competitions I won the National Award for Craft Art in 2005 for a very large ceramic sculpture almost the same size as a small car. Along with the honour of winning came a prize of £10,000.
In 2011 I moved to the UK to be with my husband Phil Rogers and we now live in Rhayader, Mid Wales where I make as much as I can while looking after my 6 year old son Ethan. I am now in my new studio full time now that Ethan is at school. 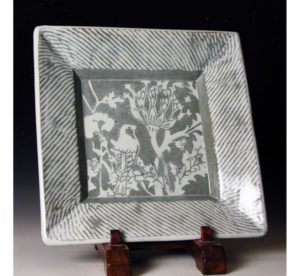 Presently, I am making tableware which is a fusion of traditional Korean techniques using inlaid white slip and a dark clay and the patterns are influenced by those of William Morris. The technique is complicated. I made a very large, flat master mould by carving the surface of a plaster slab 3 ft x 2 ft from which I can make plate moulds by selecting certain areas of the carved surface. Once the plate is formed it carries the imprint of the carving. I then inlay white slip to fill the hollows and then, when dry, I scrape back the white slip to reveal the crisp and clear pattern underneath. It is both time consuming and makes my back ache!

My pots are fired in any of our three kilns but I prefer to have them in the wood kiln whenever possible. I love the idea of my pots being used everyday unlike a sculpture which is entirely decorative or made to convey a message…I feel that by using my pots they become a familiar and comforting feature of a persons life.
I hope you like my work and do please call by if you are in Mid Wales……
My work is included in the following public collections:
The Reeves Collection at Washington & Lee University. Lexington, VA. USA
The Ken Stradling Collection. Bristol, UK
Fitzwilliam Museum, Cambridge, UK.