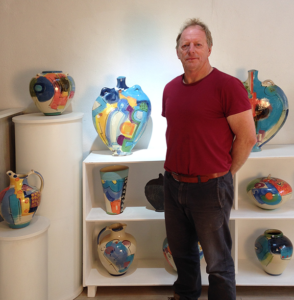 Richard Wilson was born and brought up in Norwich, and has been making pots since the early 1970s. After studying for two years at Great Yarmouth College of Art, he worked from 1974 to 1980 at Le Dieu Pottery in Norwich before spending 3 years in Australia and New Zealand, and a further five in Germany, working with many potters using different techniques, in particular woodfired saltglazes.
Whilst in Germany, Richard spent some time with potters whose work drew from Eastern European designs, and has himself been especially inspired by Hungarian and Romanian slipware from the 1800s. He has also been strongly influenced by the Cardew tradition of English country pottery, having spent some months working at Wenford Bridge in the 1980s, learning about the strengths and subtleties of Cardew’s work.
Recently his work has explored colour and abstract patterns in strong forms that capture the ebb and flow of the sea and the landscape of South West Dorset.
As a member of several pottery associations including Professional Member of the Craft Potters Association and ex chairman of the West Country Potters Association, he has been selected over the years for many ceramic fairs here in England and in Europe.
Richard’s work is sold in many galleries in the UK from Scotland to Cornwall and also the Caribbean. 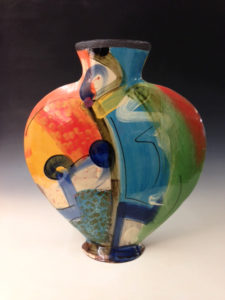