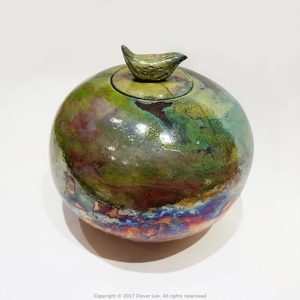 Clover was born and raised in Guangdong, China. She found her passion in art during her youth and started practising pottery making 2011 in London. After watching the first series of The Great Pottery Throw Down TV show, she was inspired to become a craft potter, and participated in the second series of the show, where she was a finalist. Her works are largely influenced by traditional Chinese and Japanese culture, inspired by the interaction of nature and human to promote flow of energy and harmony. Her recent works are mostly functional items with a combination of wheel throwing and handbuilding techniques. She is particularly interested in alternative firing methods such as Raku and pit-firing.