The following photos were taken by Martin Eastabrook: 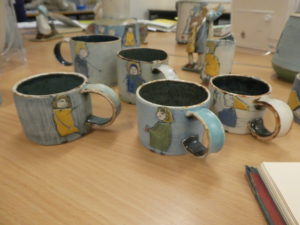 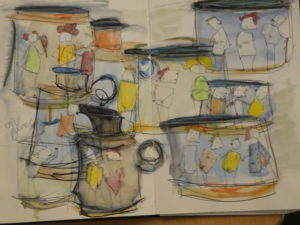 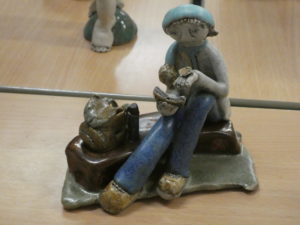 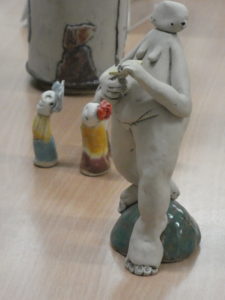 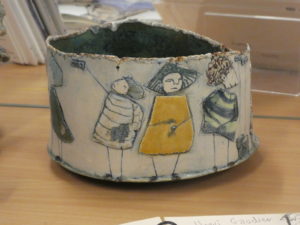 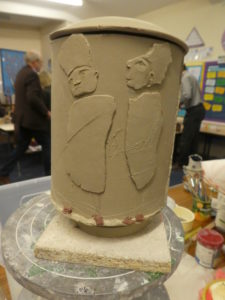 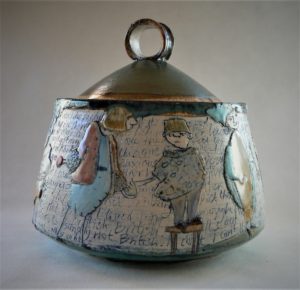 Katherine opened her talk with a game she calls ‘Who am I?’ the audience are each given a small handmade card with 4 torn paper ‘splats’ on and it’s up to them to consider how they might be turned in to characters by adding facial features, deciding which way they are facing and what they may be saying to each other. Katherine’s work is based on fitting things together (a skill she developed working in a reuse-recycle centre) early influences being Kurt Schwitters and Karel Appel, and a keen interest in life drawing. She studied at Leicester Poly later completing an MA and enjoys her Art teaching role. Children’s drawings interest and inform her work, the pairing down of figures and characteristics into shapes torn from scrap clay form the simple but highly expressive figures she uses to decorate her ware. She calls these random pieces of clay Splats and adds them to her vessels weaving stories with them. Characters are placed all around a pot, mug or bowl, for example on a mug she would have one for the drinker and one for the watcher.
Katherine uses Scarva Earthstone Original smooth but claims is it prone to warping. Ware is fired to bisque (10000C) then decorated using slips, Botz ready mix brush on glazes and underglazes. Mazerine blue is a favourite base colour which is applied then wiped back to outline figures and lines.
Her latest work is based upon the apothecary jar, a move away from her figures and less fragile. Our demo was a small jar.
Starting with a cylinder (she has a large collection of cylinder shapes made from a variety of packaging in her studio) she hand rolls a slab of clay, then cuts it to the required height and length to fit around the chosen cylinder. She then carefully wraps it around her chosen cylinder using a nappy liner on the cylinder rather than newspaper to stop it sticking. Once dried a little the cylinder can be removed easily and will stand alone. A base and lid circle are cut from the remaining slab and are formed using the nappy liner placed inside a wider diameter ‘lid’ cylinder shape, the circle being pressed lightly into the lid cylinder to form a slight dome, the edges of the now domed circle are thinned using her fingers before cross hatching and applying a lumpy slip (she likes the way the slip oozes out unexpectedly) then placing it onto the crosshatched bottom of the clay cylinder. A footring is added by using a thin strip of clay formed into a circle and slightly chamfered to fit the dome, again this is cross hatched and slipped on. The same process is used for the top of the jar but this time a funnel is added. The funnel is formed from a small length of clay with a torn top and end edges, this is crosshatched and slipped on. A landscape line is marked onto the bottom of the pot just above the join to provide a ground for her figures. The ‘splats’ for the figures are laid on, one figure at a time so adjoining figures can be carefully ‘paired’; their body language complimentary to each other. The characteristics then evolve, Katherine’s wide experience of life drawing and sketching the human form really come in to play here as she understands the relationships of limbs to poses. She uses Xiem and dentist/wax carving tools to achieve fine detail to faces and a three pin scratcher tool for cross hatching. She adds lugs to either side of the jars and some text which she simply etches in with a pin tool.

Fatbellypots
Figures and pots by Katherine Kingdon
I make figurative ceramic sculptures and illustrated vessels and am always looking for meaning in the random and irrelevant. In my current work I am having fun exploring character through pose, facial expression and sometimes text. I enjoy the suggestions of stories that develop and the dynamics within a group. My Piece ‘Missing Penguin’ won the Volunteers’ prize at Black Swan Arts Open 2019 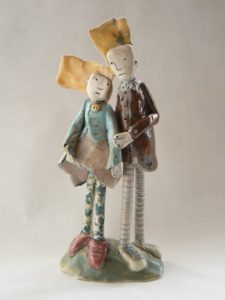