Mick & Lesley Dixon run Bartley Heath Pottery which is situated in North Warnborough near Odiham in Hampshire. The Pottery is close to Junction 5 of the M3 between Hook & Odiham. They opened in 1974. They have a Showroom attached to their cottage and their workshop & kiln are in the garden to the rear. They work mainly in reduced stoneware. They use electric kilns for biscuit firings and a gas kiln for the Stoneware, which is glaze fired to 1260C. All their standard range of pots are suitable for oven and microwave use and are safe in a dishwasher.
Talk and Demonstration: 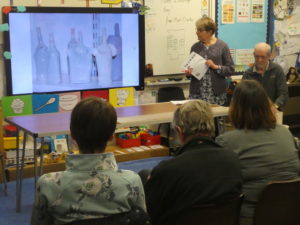 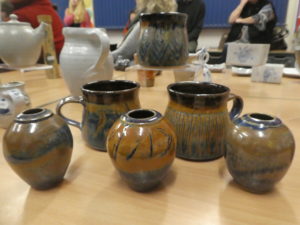 Mick and Lesley Dixon gave an interesting review of their careers in ceramics with slides and anecdotes of their respective developments.
The clay used is blended at Bartley Heath pottery using normally 2 part of Valentine fleck to 1 of White stoneware. This reduces the apparent fleck and gives a good response to the many glazes they have developed and continue to develop. Firing is electric for bisque  and up to cone 11 in a gas fired laser kiln. Reduction is chosen depending on the glaze.
Mick demonstrated two items a teapot and a square sided bowl.
Teapot
The body was fluidly thrown leaving sufficient material in the rim for forming the gallery. Decoration was by applied slip (a combination of cobalt and chrome) cutting through with a notched credit card. (See finished example) . 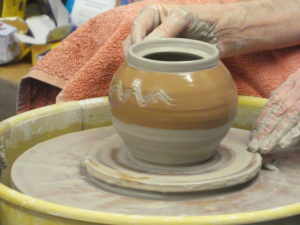 The lid was thrown and sized to fit (calipers were used) . 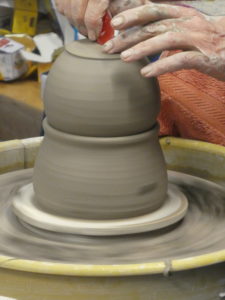 The foot indented to stop the lid escaping on pouring. The spout was delicately thrown with slow finishing reducing (apparently) the need to compensate for clay memory/ relaxation.
In the time honoured fashion a previously prepared  leather hard body was trimmed in a thrown chuck. The use of a glaze stopping groove was remarked upon.
The Lid was thrown on a centred bisqued chuck of which Mick has a complete range of sizes. The vent hole in the lid finished the process. 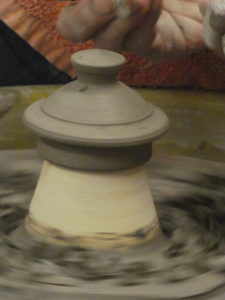 Mick detailed the cutting of the spout to fit the body and the piercing of the body to allow pouring. Hatching and slip secured the spout to body.  The tip to fettle once the slip had stabilised was emphasized.  Rough edges in the body were removed prior to firing. 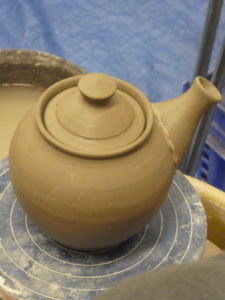 The handle was pressed onto the body and lightly secured to allow refinement of the top attachment point. Once secure the handle was pulled to the desired section and fixed. 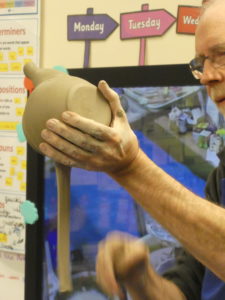 Squared open bowl
The wall was thrown without a base, cut off and whilst still on the batt gently squared by hand. Corners were refined by pressing by fingers. A flat base was thrown and detailed. The diameter exceeded the diagonal of the squared base. At the leather hard stage the two parts were married up and excess material removed. Handles were rolled across  an indented plaster bat to emboss the clay and fixing was by hatching and slip. 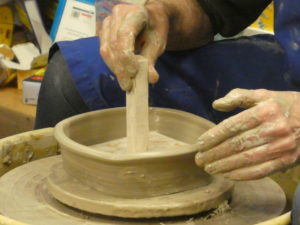 The raffle prize of a teapot was won by Jane White. 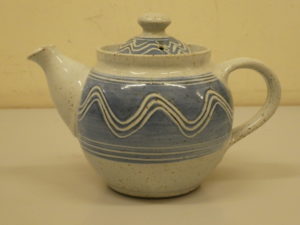