Martin says of his work “Clay seems to have chosen to be my art medium.

It seduces me to experiment with form and texture whilst glazing can be so elusive that opening the kiln is filled with expectant optimism. I can never be too sure what will happen.

And so I dabble with many of the ceramic processes Raku, Oxidation and reduction firing, kiln building, wheel and hand building, glaze formulation and tool making.

As long as it is still fun in the making but always searching for the perfect pot.

The theme for this evening will be press forming clay in one and two part home-made plaster moulds.”

More information can be found at Martin’s website www.martineastabrookceramics.com 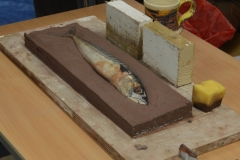 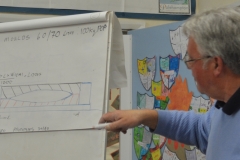 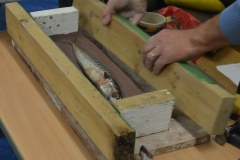 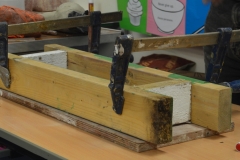 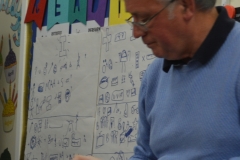 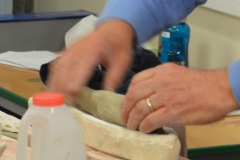 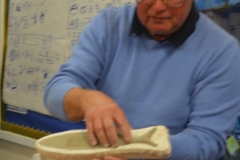 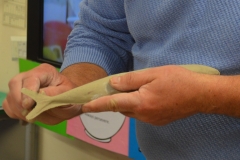 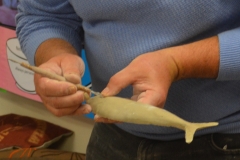 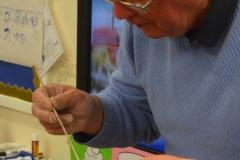 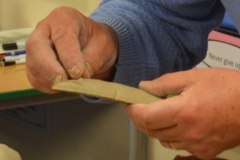 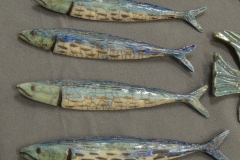 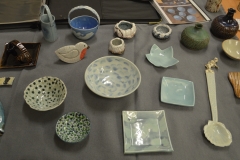 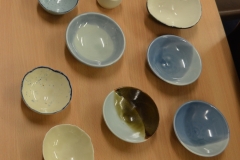 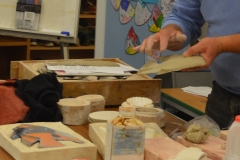 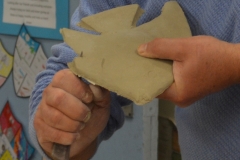 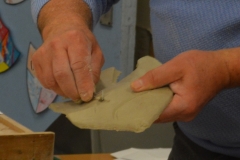 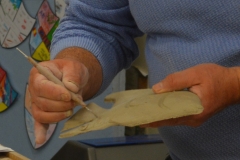 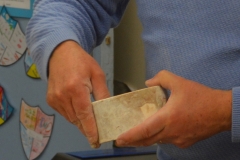 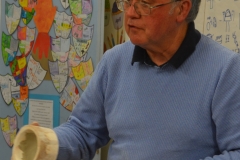 It was a refreshing change to have one of our long standing and committee members give a talk about one or two aspects of his wonderfully diverse range of work. Martin came into ceramics via the City & Guilds route and makes pieces using all of the building methods as well as throwing. His passion is to explore the possibilities of glaze and different firing techniques. He has built several different types of kiln (wood, raku, pit) and is currently involved with an Anagama project in Oxfordshire. He started with teapots; throwing the base and lids, then adding on using a slab handbuilding technique to make the top of the pot. He is a keen hoarder and skip raider, and has a variety of tools in his ‘man cave’ to use for making wooden templates for slab work. A clever and quick method for making a ‘Tricircle’or ovoid, or indeed any shape with rounded corners is to cut out a template from ply using a router tool, then lay over the whole board a piece of soft fabric cut on the bias, then lay over your slabbed clay and give it a sharp tap downwards on the sides of the board so the clay is forced down into the shape but is held by the fabric. This saves time finding an object to cast a mould from or indeed making a positive from clay to cast. The template can be used repeatedly in order to create the same shape; useful for making a run of the same object e.g. bowls.

Martin favours Valentines clay bodies and fires in a downdraft kiln; this is a kiln designed to force the flame and heated air to circulate through the kiln, the flame being introduced at the bottom  naturally flows upward, the construction however forces the flame back downward, to exhaust at the bottom of the kiln. These kilns consist of 4 main components; the firebox, the stacking area, the damper and a chimney. Fuelled by propane, he fires usually within the range of 1250 – 1260OC. Among his glaze recipes he makes a wonderful cobblestone effect glaze using a mix of Magnesium Carbonate 40% and Nepheline Syanite 60%.

Martin gave us a demonstration of making a mould for a fish, unfortunately he had intended to show us a Plaster of Paris mould making technique but the school had recently laid new carpet in the classroom so that idea was abandoned. If you want to try making a plaster of Paris mould, you can buy the plaster from Tiranti’s or potters plaster from Bluematchbox (potters plaster is slighter coarser so not so good if you need fine detail) and mix 60/70litres water to 100kg of plaster, use soft soap (available from Tiranti’s or Bluematchbox etc.) over the item being cast to allow its easy release once the mould has set. Remember to fill in any voids or undercuts with clay – they can be cut out after the item comes out of the mould in the refining stage. Martin had brought along a lovely fresh mackerel to cast, around which he had already built up layers of clay to its halfway point, intending to pour plaster over the exposed half therefore creating a two part mould. Use a former around the object you are casting to keep the plaster in, this can be a wooden former or a good clay wall. Leave the mould to dry out thoroughly before use. When making a two part mould it is a good idea to use ‘natches’; little rubber bung like things that fit in to each other to ensure a tight and exact seal while the clay is drying in the mould. Natches are inserted halfway into the wet clay around the object, and the plaster encases them.

Using your press mould, press the clay firmly into the mould making sure all the detailed bits have clay in. Drag a wire over removing any excess clay and build up any weaker areas (Martin builds up the tail join on his fish to avoid them breaking). Once the clay had dried a little you will be able to tap the item out of the mould easily and tidy up any edges and add texture and detail as required.  The use of moulds is great for producing many items of the same shape, whilst individuality can be maintained if required through different surface textures and glazes.