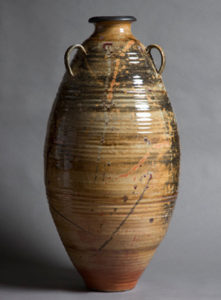 Harriet gave us a throwing demonstration including a ‘landscape rim tea bowl, a faceted bowl a bamboo mug and a jug spout, using white St Thomas clay. Having learned her techniques in the Aldermaston pottery where precise form was practised, she has had to adapt her throwing style to become more ‘loose’ in order to throw a landscape rim. Using 600gms (1.5 lbs in old money) of clay she forms a classic donut then into a short cylinder and pulls up and out to form the bowl shape. Once almost formed she pinches several fairly deep vertical impressions using her fingers then continues to throw, this causes the rim to distort and become ‘landscape. She puts a deep finger spiral in the bottom to catch glaze/glass and makes impressions with shells and a roulette texture wheel (available from Grant at BlueMatchbox) on the outside to provide texture and interest. She gently smooths the rim making incisions with a knife to catch ash and glaze. When it comes to adding a footring, Harriet uses a clay chuck to support the rim whilst she adds a coil of clay and throws it into the base. Decoration combines soda, ash, glass, glaze and lustres, the latter being fired after to 7300C . Harriet uses Gas, wood, electric and Anagama kilns, and has spent many years trying to perfect the art of carbon trap shino glazing; where the glaze contains a high content of soda ash in its mix which often facilitates the trapping of soot on the ceramic surface. The black soot deposits appear often at high points or in spotted patterns in varying degrees.

For her faceted bowl Harriet usually facets at a soft leatherhard stage which gives a tight more precise look to a vessel, however if done at the throwing stage it gives a looser effect. First a cylinder is thrown then a rough textured clay wire is used to cut off layers all around the outside of the cylinder. Then the cylinder is thrown out into a bowl just from the inside whilst the rim is gently supported forming a shallow faceted bowl.

For her bamboo (Christened by WFP’s own Virginie) mug Harriet throws a cylinder then mentally marks the hallway point and presses in below this point then above it forming the convex sides and a sharp central line. The handle is pulled off the mug then joined and possibly pulled slightly more to achieve the right shape.  Harriet likes to pull her handles with a line down the middle to compliment the line around the middle of the mug. She uses 340gms of clay (12oz in old money) per mug.

The jugs and spouts are thrown. The jugs start as a water tower shaped cylinder then a leaf shape is cut out from the bottom which allows it to be pressed into an oval shape, then a piece of clay is added back in to close the opening. There are other ways of making ovals but Harriet prefers this method.  The spouts are thrown like a teapot spout usually ‘off the hump’ then are cut off and cut in half, reshaped and added to the jug.

Harriet rounded up the evening by talking us through some of the pots she had brought with her, including her singing pebble stones; these are made by wrapping a real smooth stones in slabbed clay in two halves then the halves are joined together and a small piece of clay is left inside to form the ‘bell’ sometimes they ring but sometimes the reaction of the firing is so great that the tiny piece of clay gets stuck to the inside. These are fired on her homemade stilts; a triangle or similar shape piece of clay and thick Nichrome wire cut and inserted into the clay to form the ‘pegs’ on which the stone rests.

Harriet uses a variety of clays including Limoges porcelain. 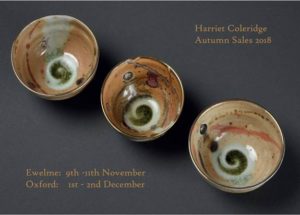 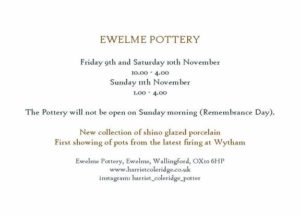 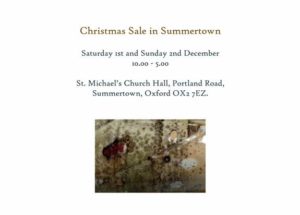 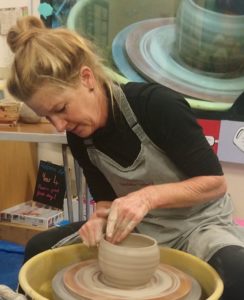 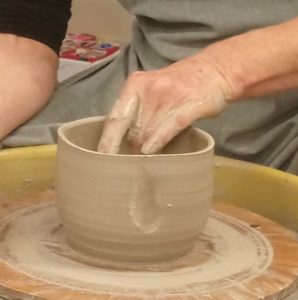 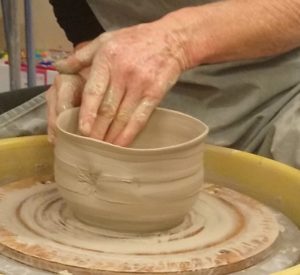 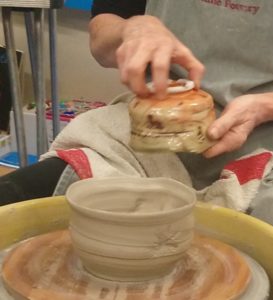 Harriet then demonstrated a faceted tea bowl; a technique recently shown to her by Kevin Millward: 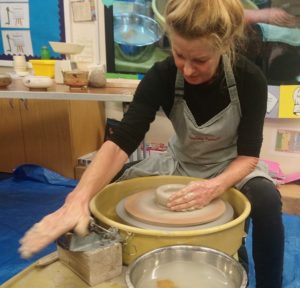 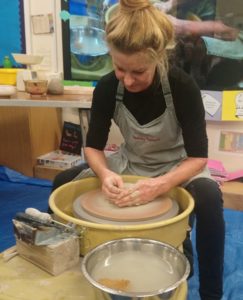 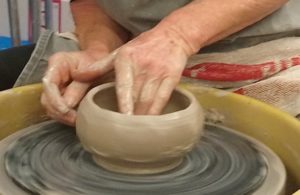 A selection of Harriet’s recent work; 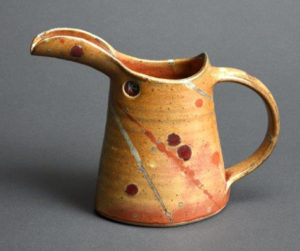 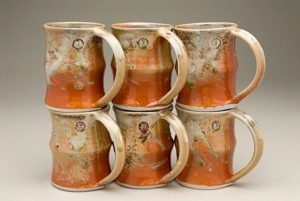 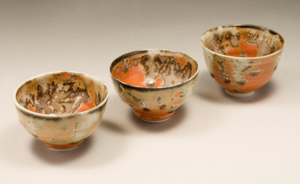