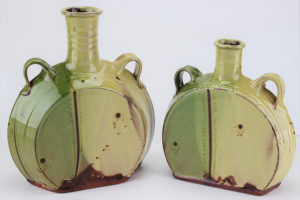 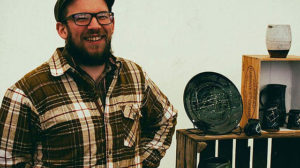 Spending my youth spread between heavy metal festivals and sub heavy raves (that’s loud music for you older folks). It dawned on me that at some point I was going to need a “real job”. I decided that a 2 year course in ceramics might calm the soul…it didn’t, but it certainly fired it up and it turned out I was quite good at it.

So after escaping Devon to the Hustle and Bustle of Brighton (that’s as near to a city I would live), to see what metropolis had to offer, I soon realised that you can take the boy out of the Shire, but you cant take the Devonshire out of the boy. Returning to my roots seemed the best thing to do.

Loving all things Devon (and Brian’s kiln not reaching stoneware temperatures) Slipware was the only way to go. Taking from the traditions and heritage of North Devon and mixing in some contemporary freshness to create functional wares at affordable prices. My current work has a real folky appeal and is now being collected by those who have discovered the joy of handmade wares with personality.

Im always experimenting by modifying glazes and varying firing techniques. After all, being able to control fire to create, instead of destroy, is a sensible pyromaniacs dream.

Russell Kingston 10th April 2019
Russell raw glazes his leatherhard earthenware pots with slips made with oxides, and fires them once. The slips for leatherhard are made slightly thicker than for bone dry, the end result alters between thick and thin as a thicker slip produces stronger colours.
The clay used is Valentines Standard Terracotta or Valentines Sculptural which he fires to 11400 ramping at 50-600 per hour to 6000 then full to 11400.
Glaze recipes for a 5 kilo batch – food safe.
Lead Bisilicate 2 800g
Borax 1200g
China Clay 550g
Quartz 350g
Bentonite 100g
Iron 1-6%
or Cobalt instead 1%
or copper instead 1% or simply have a play around to achieve your own effects!
(If the glaze is cloudy reduce the Borax) Recommends John Mathiesons Techniques using Slips book.
Slips
Hyplas 71 (Ball Clay) and water for white
1-3% or 4% copper
Iron and Manganese 10% or more each
Red Iron oxide
Firing to 11000 – 11400 never over 11600.
Russell usually pours the slips unless it’s a big vessel where he dips the top then pours. He uses Xiem Slip Trailers in sizes 1 – 3oz from Scarva which give far greater control. These retail at around £25.13 for a 1oz and £29.10 for a 3oz follow the link below to the Scarva website. https://www.scarva.com/Images/Models/Original/5123-1.jpg
Throwing tools are
Chamois for softening rims
Sponge on a Stick
Sponge
Credit card (old)
Hollowing tool and a throwing stick for angles
Russell likes to throw very wet, and rolls rims for strength and to minimise chipping. Spoons are fired on Nichrome wire, he makes his ‘bakers’ fairly thick to keep the heat in.